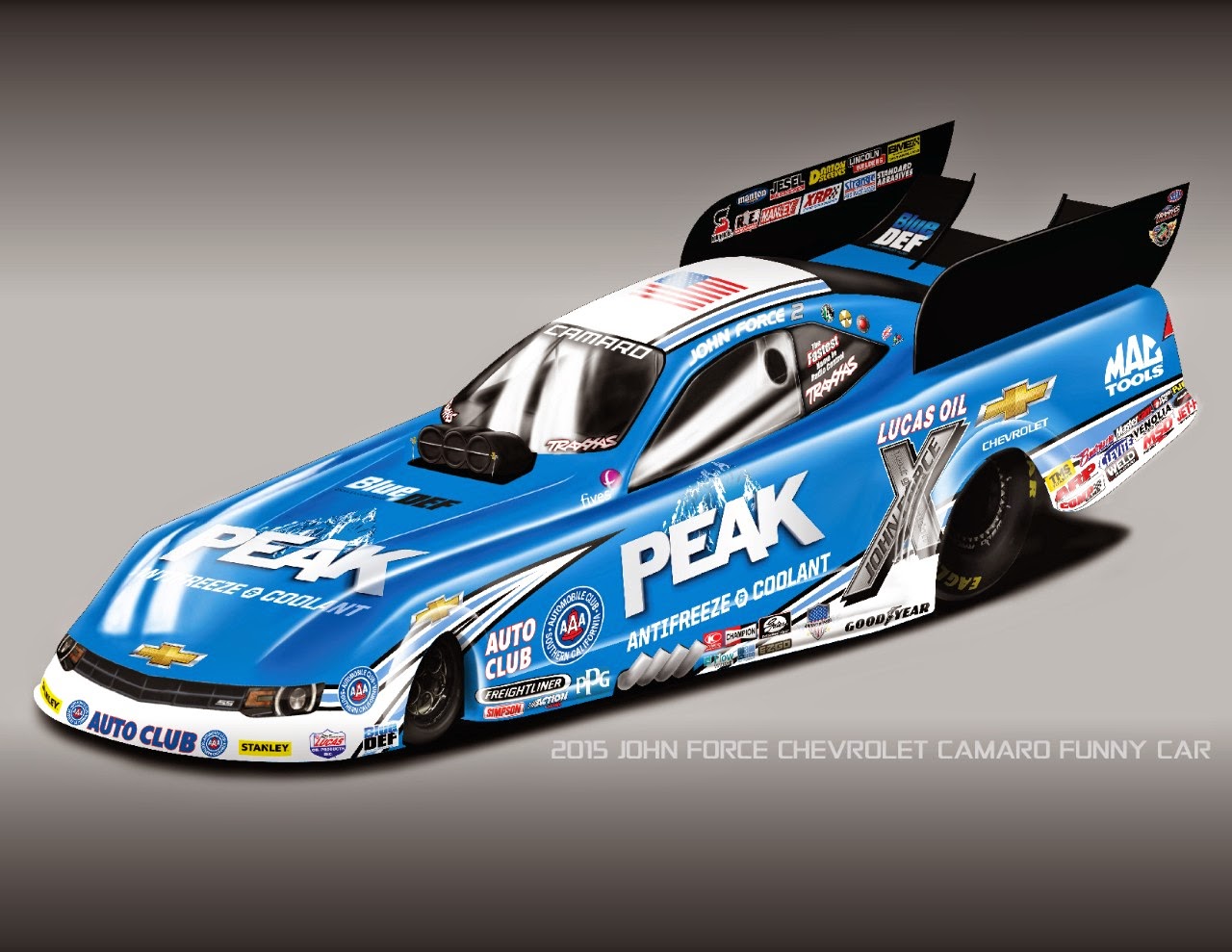 For 16-time Funny Car category champion John Force, the conclusion of the 2014 NHRA Mello Yello Drag Racing Series' season concluded two long running relationships. First came the end of a 29-year run with motor oil Castrol as a team and vehicle sponsor. The 2014 season was also the final year of John Force Racing's relationship with the Ford Motor Company. Since 1997, the funny car team sailed down the quarter-mile distances with Ford Mustang funny car bodies. Affecting not only John Force's famous funny car entry, the loss of Ford and Castrol for 2015 has resulted in a complete reshaping of the John Force Racing team's four machines. While Peak Antifreeze and Lucas Oil was announced late last year as signing on to fill the void left by Castrol, the supporting vehicle manufacturer was kept quiet until last week.

After speculation mentioning Toyota and Dodge, Chevrolet has been confirmed as the force behind the John Force Racing team for 2015 and beyond. A multi-year deal, Chevrolet Camaro bodies will be mounted to the funny car team's entries for John Force, Courtney Force and Robert Hight. The John Force Racing Top Fuel racing car piloted by Brittany Force will also wear Chevrolet bowtie badging next season. “John Force is a racer’s racer and a fierce competitor, and we are excited to welcome John and his team back to Chevrolet.” said Chevrolet vice president for Performance Vehicles and Motorsports Jim Campbell.

John Force, CEO and driver of John Force Racing commented it is great to be back with Chevrolet saying, “I started my career in a Chevy and my plan is to keep racing with them for many years to come. This is a great American company and we are excited about the opportunities in front of us,". The funny car legend's career was launched driving a Chevrolet Corvette. Wheeling a "Brute Force" brand Chevrolet early in his career, Force would eventually run Camaro, Citation and Cavalier bodies from 1978 to 1986 in NHRA competition. John Force's first final round victory came with a Corvette in 1986 while the 1986 season resulted in three additional event wins with a Cavalier. Switch to Oldsmobile in 1987, Force returned to Chevrolet in 1994 running a Lumina body. The 1994 season became the only time Force and Chevrolet shared a Funny Car championship in the NHRA division. The return to Chevy is also a return to General Motors for Force who campaigned with Oldsmobile and Pontiac until the early part of the 1997 season.