Too many times, forgetting an anniversary would end with someone spending time in the proverbial doghouse. This has apparently happened this year as the 2016 Verizon IndyCar Series season concluded with no major celebrations or recognition for what is 30 years since a major current partner of American open wheel racing began participation in the sport. The following article is a collection of the details I’ve learned as well as some insight from engine builder John Judd on what was a quiet 30th anniversary in the Verizon IndyCar Series.

During the week where the 30th running of the Canadian street race now known as the Honda Indy Toronto, I was compelled to capture the flavour of the inaugural event. The viewing experience provided me some insight into a period of time where I was too young to absorb auto racing in the manner I do today. A race that featured television coverage with no regular onscreen statistics, the league used a local yellow flag to retrieve a crashed car driven by the senior Jacques Villeneuve (known today as Uncle Jacques) and the win of Bobby Rahal, the 1986 event also included a spectacle that surprised me. On the engine cover of the Valvoline-sponsored Galles Racing race car driven by Geoff Brabham, I observed Honda branding on the engine cowling.

Since I was born in the 1980s and was not an avid follower of auto racing until the 1990s, I was surprised by to learn about the appearance of the Japanese automaker on the track ahead of their 1990s appearance with Rahal Hogan Racing. Honda’s acknowledged involvement with IndyCar racing reflects on a debut during the 1994 CART (Championship Auto Racing Teams) PPG Indy Car World Series season. This history is acknowledged as official since it marks Honda Performance Development’s entrance. However, for what was less than a two-year stint in the 1980s.  Honda was represented in American open wheel racing through an unusual manner. In fact, first chapter to the black sheep existence what would be the Brabham Honda engine was practically challenged from the start.

Consulting the British company Engine Developments Ltd. founded by John Judd and Jack Brabham, the Japanese automaker commissioned the construction of the Indy car power unit after previously successful Formula 2 program participation. In 1979, the race engine developer and Honda partnered to create a 2.0-liter V-6 engine for F2 competition combined with a Ralt chassis. The combination went on to collect multiple championships in the early 1980s. “After working with Honda on their V6 F2 engine 1979 to 1982 we were asked to participate in their plans for an Indy engine” commented Judd. Switching engineering focus from a Formula 2's naturally-aspirated V-6 to an ultra-exotic Indy car’s turbocharged V-8 engine could have been a tricky proposition. However, previous experience working the Cosworth DFX powerplants gave Engine Developments a leg-up in the creation of a Honda-supported effort.

By the end of 1985, Judd and Engine Developments crafted a turbocharged 2.642-liter, eight-cylinder race engine but lost an important backer. Before the powerplant could turn a competitive lap, Honda was no longer officially involved in the program. Despite this, the ignition and fuel delivery system employed on the engine was credited to Honda. “Honda decided to cancel the Indy project around 1985 but kindly allowed us to keep what we had already done and to develop the engine ourselves so we were free to sign up as many customers as we could find.” John Judd remembered as the door was still open for the Brabham Honda engine to race in 1986. Contending in a CART PPG Indy Car World Series with grids dominated by Cosworth engines, one team decided to take a chance on the Brabham Honda powerplant.


In the middle of the 1986 season, the #8 Valvoline-supported Galles Racing race car driven by Geoff Brabham would debut the new engine. The Brabham Honda powerplant started 10th at the Portland International Raceway but showed promise in its premiere. In fact, if not for a spark plug tip, Brabham may have been in position to win. A 7th place result at Portland was nonetheless an impressive maiden voyage.

Later in the 1986 CART PPG Indy Car World Series, a season-best run came in the 500-mile high-speed endurance race at the Michigan International Speedway. A race considered a torture test on race cars and engines, the Brabham Honda powerplant propelling the Valvoline machine ended the race in fourth place despite being involved in a late crash. Though the car started in 28th place, the Valvoline #8 car climbed mythically. One key trait exposed on the Brabham Honda engine was a fuel mileage advantage on the Cosworths in the field.

Although Portland and Michigan were high points to the 1986 debut of the program, the Brabham Honda engine would not enjoy too many additional successful runs tainted by performance issues in addition to an uncompetitive Lola chassis used by Galles Racing. In the remaining six races on the CART PPG Indy Car World Series schedule, a Cosworth engine powered Brabham’s Valvoline race car instead of the Brabham Honda.

Fully committed to the Brabham Honda engine for the 1987 Indy car season and now running a March chassis, Rick Galles’ team with driver Geoff Brabham scored an 8th place in the second event at Phoenix International Raceway. 1987 would also be the debut of the Judd-developed Brabham Honda engine at the Indianapolis 500. Alongside regular driver Geoff Brabham at the Indianapolis Motor Speedway, a second Galles Racing entry powered by the Brabham Honda engine was placed in the 1987 Indy 500 driven by Jeff MacPherson. The American MacPherson started in 12th pla
ce while Brabham was in the middle of the fifth row in 14th place. While Geoff Brabham’s vehicle dropped out of the 500-mile with an oil pressure issue, Jeff MacPherson’s #11 car remained in competition finishing in 8th place 12 lap behind winner Al Unser. The Brabham Honda powered car was the only non-Cosworth propelled vehicle to cross the finish line at the 1987 edition of the Indy 500. While it would be the first time Honda would be connected to powering race cars at the Brickyard, neither the race car of Brabham nor MacPherson prominently featured the ‘H’ symbol and was marked with “Honda West” wording. 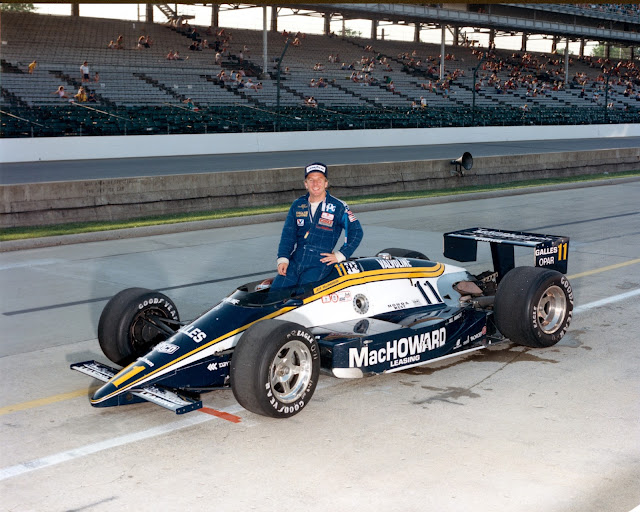 Later in 1987, the Brabham Honda engine posted two runner-up finishes in Pocono and at Elkhart Lake’s Road America. A final podium was obtained in Miami’s Tamiami Park with a third place finish by Brabham. The podium in Miami would be the last accolade for the Brabham Honda name. “By 1988 we were supplying engines for F1 and F3000 under the Judd brand so we had also switched the Indy branding to Judd by that time, of course with Honda's agreement,” John Judd recollects. The Judd AV V-8 engine was fielded by Truesports in 1988 where Bobby Rahal piloted it to a Pocono 500 win. The Judd engine originally inspired by Honda’s motivation would continue to be run through to the early 1990s. Engine Development and Honda maintained a relationship beyond Indy Car. “In the background we had still been working with Honda on their F3000 engine which was initially based on our joint Indy engine platform.” said Judd.

The Brabham Honda engine’s status in past Indy car competition will likely remain a rarely mentioned footnote in racing. It’s unofficial status with Honda’s auto racing history presents conflicted observations for how to address the 1980s powerplant’s short run. However, as the unofficial entry towards what is now a great IndyCar presence, could the Brabham Honda era be suited for commemoration as the beginning of the current journey.