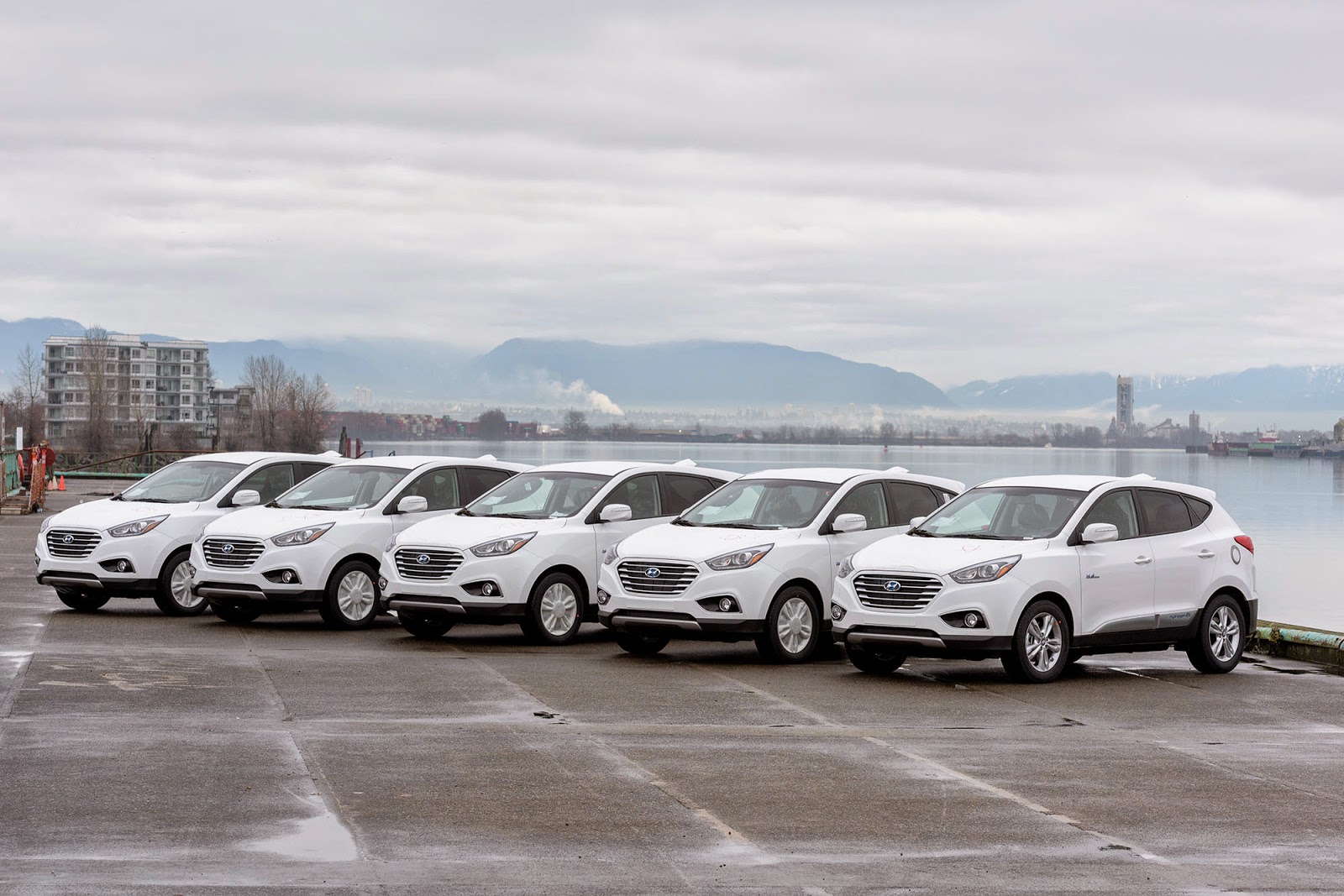 Late last year, Hyundai pledged to become the first auto manufacturer to offer a hydrogen fuel cell vehicle in Canada. An electrified powertrain vehicle already available in the United States in parts of California, the Tucson FCEV is based on Hyundai's conventional gasoline-powered crossover. Capable of driving up to 426 kilometers on a tank of hydrogen fuel, the Hyundai Tucson FCEV is propelled by 134 horsepower driven to the front wheels. This week, the first Canadian-destined models of the Hyundai Tucson FCEV arrived from South Korea on the at a Vancouver port.

Sent onboard the "Kaijin" cargo ship, the first hydrogen fuel cell vehicles available Canada are apparently being greeted by an anxious group in British Columbia. Explaining that applications have exceeded the expectations of Hyundai Auto Canada Corporation, President and CEO Don Romano said, "We've seen a tremendous response to our call for applications. Canadians all over the country wrote us to express their support for the fuel cell program and submit an application,".

Other than the hydrogen fuel cell technology and finding hydrogen filling stations, motorists should not notice any major differences in piloting the Hyundai Tucson FCEV through daily driving. Comfort and convenience features included with the Tucson FCEV consists of leather seating, rearview camera, dual automatic temperature control with CleanAir ionizer as well as a premium stereo and navigation system with seven-inch touchscreen. Seating five passengers, one notable downside to the fuel cell crossover vehicle is reduced cargo volume. At 674 liters with the rear seat up, the Tucson FCEV's cargo area is roughly 53 liters less than the gasoline-powered model.

Available only to drivers within the Greater Vancouver area, the Tucson FCEV is only offered through a 36-month lease. At a price of $599 plus $3,600 due at signing, Hyundai's sale of the zero-emission Tucson is not being aided by any government tax intensives. The auto company has promised to relieve the financial undertaking by customers by offering unlimited hydrogen as well as no charge maintenance and roadside service.

Hyundai Auto Canada Corporation has composed a special website at http://www.hyundaihydrogen.ca/ to provide Canadians with a greater understanding of what could be expected from hydrogen powered motoring.