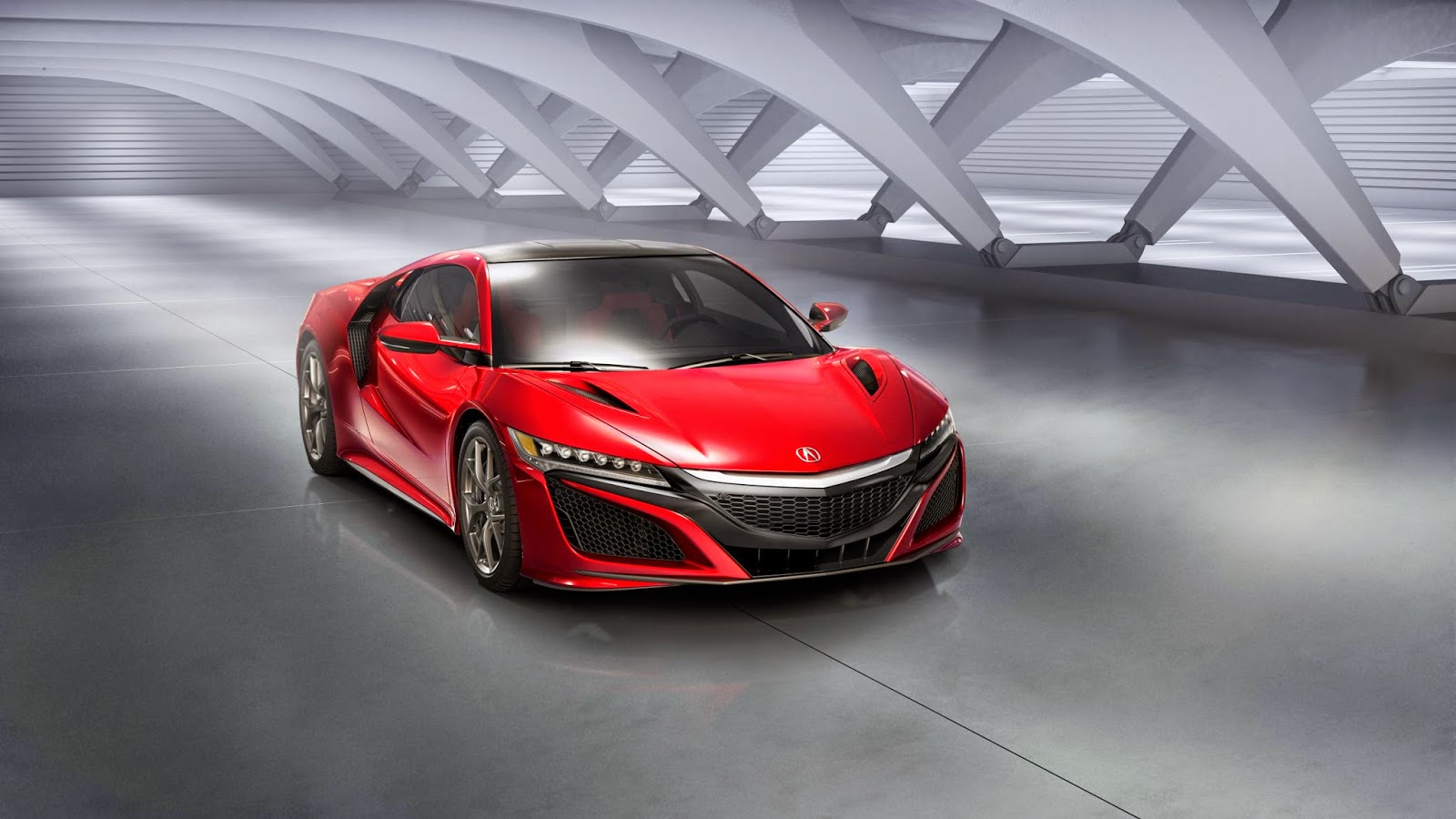 It was late 2012 at the Los Angeles Auto Show Acura tantalized the sports car world with the return of the NSX. After two concept coupes, a pledge to use gasoline/electric hybrid technology, a Mid-Ohio track run and an announcement that the car will be built in Ohio, the 2015 North American International Auto Show marked the last leg for the vehicle's journey ahead of hitting showrooms. After what seemed like an eternity in concept development, the production version for the revival of the Acura NSX supercar has finally arrived. 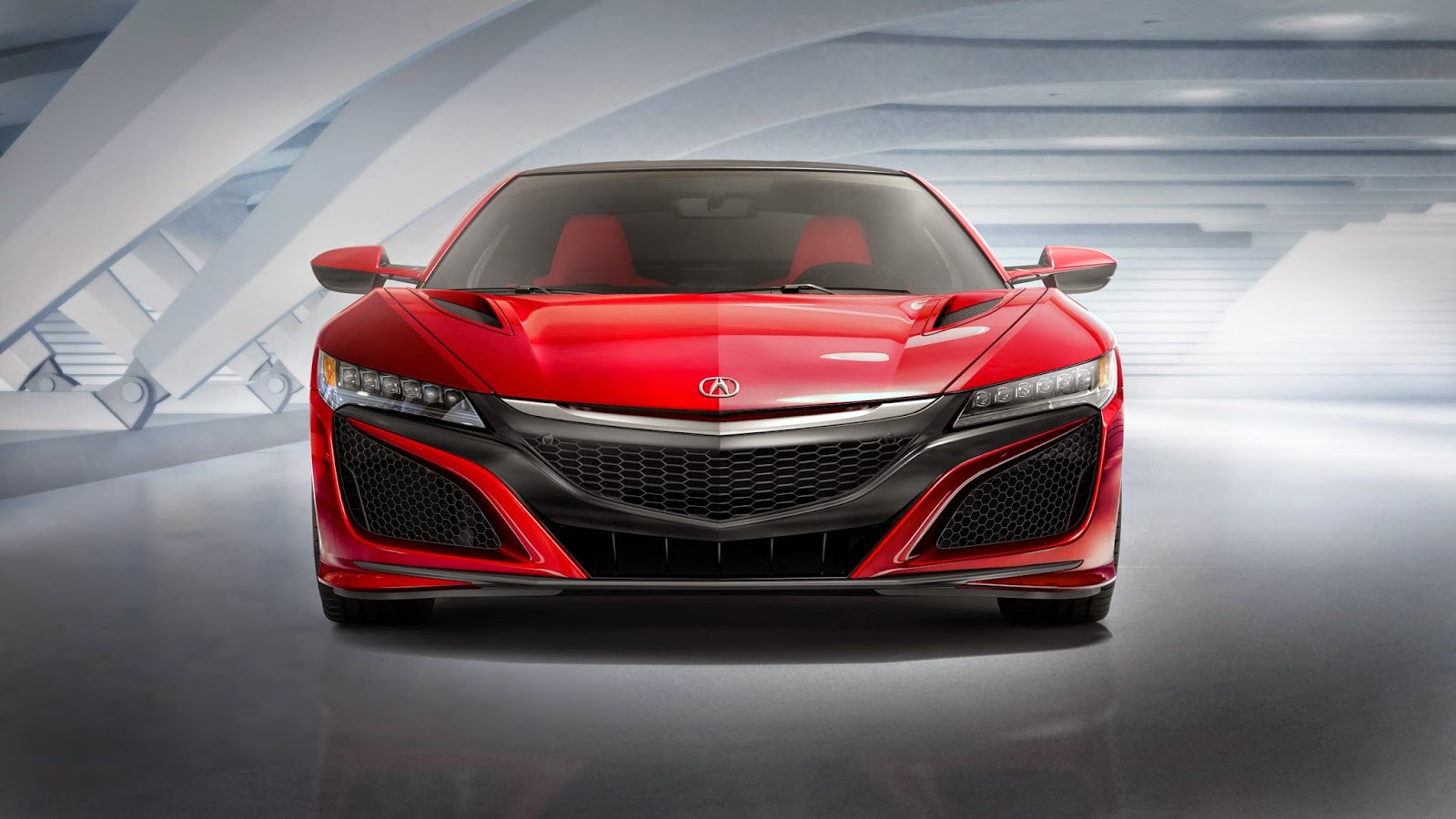 While the basic styling appearance remained intact from concept to production, the street version of the Acura NSX has been augmented through extensive on-track and wind tunnel testing. The production NSX supercar is more than three inches (80 millimeters) longer than the 2013 concept car. Improvements to the hood vents, front fascia vents, side air intakes and a revised rear deck spoiler. "The new NSX is a product of what we term 'Interwoven Dynamic' design," said Michelle Christensen, NSX exterior design project leader. 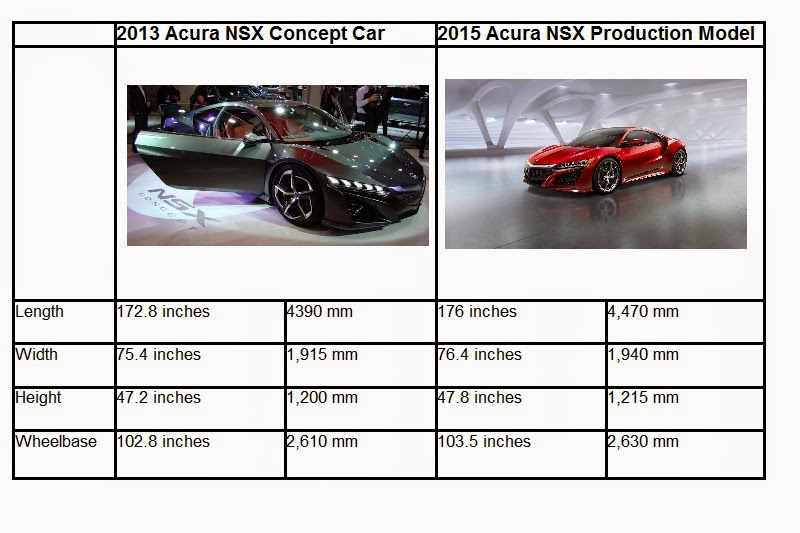 Following the legacy of the original NSX that boasted the title of being the world's first all-aluminum supercar, the new supercar continues to use lightweight components. Produced under casting technology, the body panels of aluminum and sheet molding composite is mounted to a highly-engineered frame. Ultra-high strength steel as well as a carbon fiber floor is constructed to provide excellent rigidity. The fully independent suspension assemblies on the front and rear of the Acura NSX are all-aluminum while carbon-ceramic brake discs allow superior resistance against the forces of high-performance driving. ContiSportContact™ high-performance tires belted to 19-inch front and 20-inch rear aluminum alloy wheels are regulated by Agile Handling Assist and Super-Handling All-Wheel Drive. 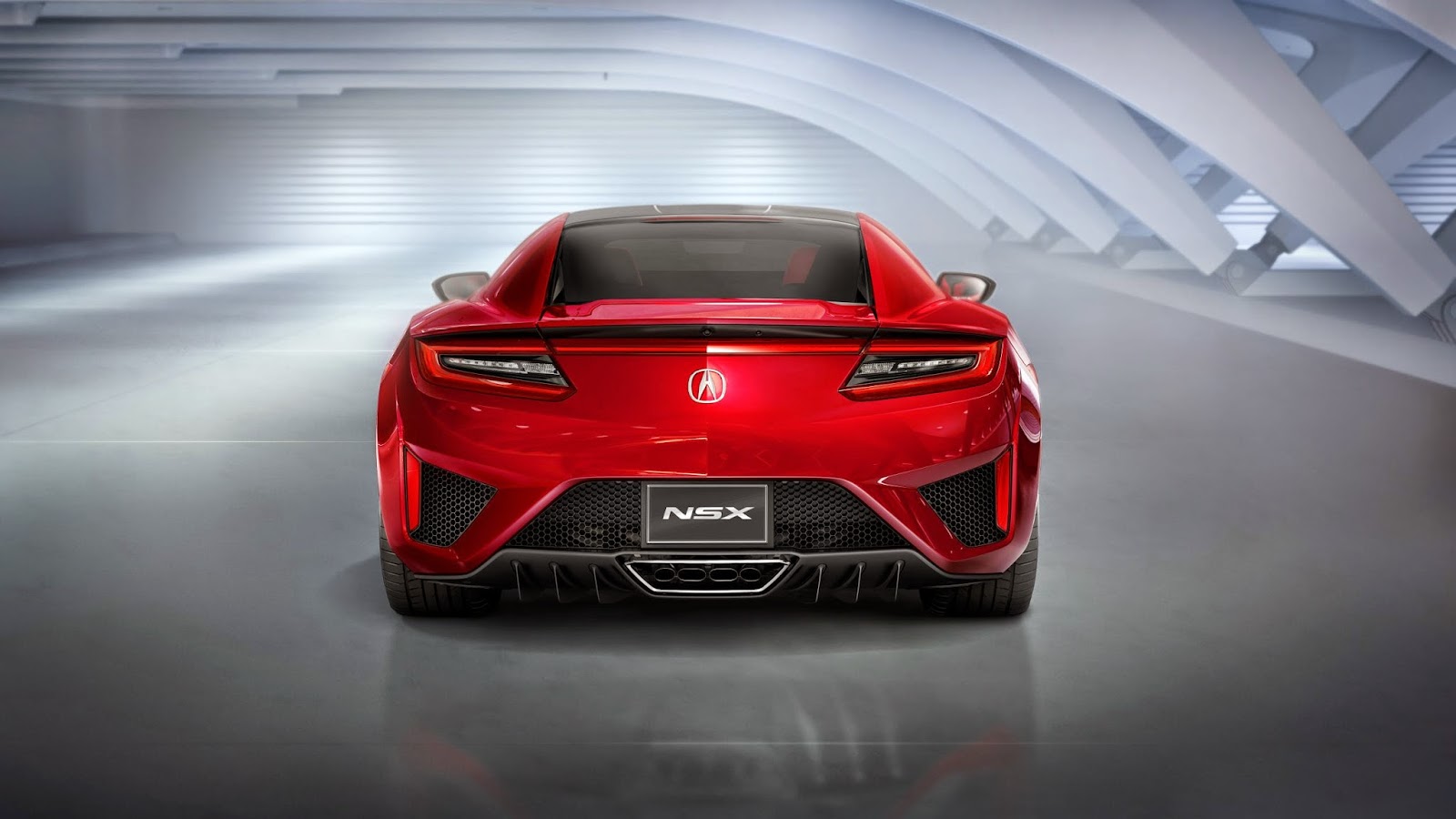 The four wheels of the NSX spin strategically by a gasoline engine combined with a three-motor Sport Hybrid system. Mounted in the center of the 2015 Acura NSX is the twin-turbocharged V-6 double overhead cam engine paired with a nine-speed dual-clutch transmission serves as the main propulsion source. While the mid-mounted V-6 engine is an enchantingly familiar sight to lovers of the original NSX, the new supercar's gasoline engine is now part of a new concert of power. Electric motors mounted to the front and rear of the Acura NSX provides support momentum. At the front, a two-motor setup delivers torque distributed between the left and right corners. A single rear electric motor located between the engine and transmission provides a boost to acceleration, braking and gear shifts. What has been bothersome with the official release of the NSX is Acura has not immediately introduced performance details of the Sport Hybrid powertrain (obviously this is the information we are most intrigued to know). The only clue given was it is at least 550 horsepower. 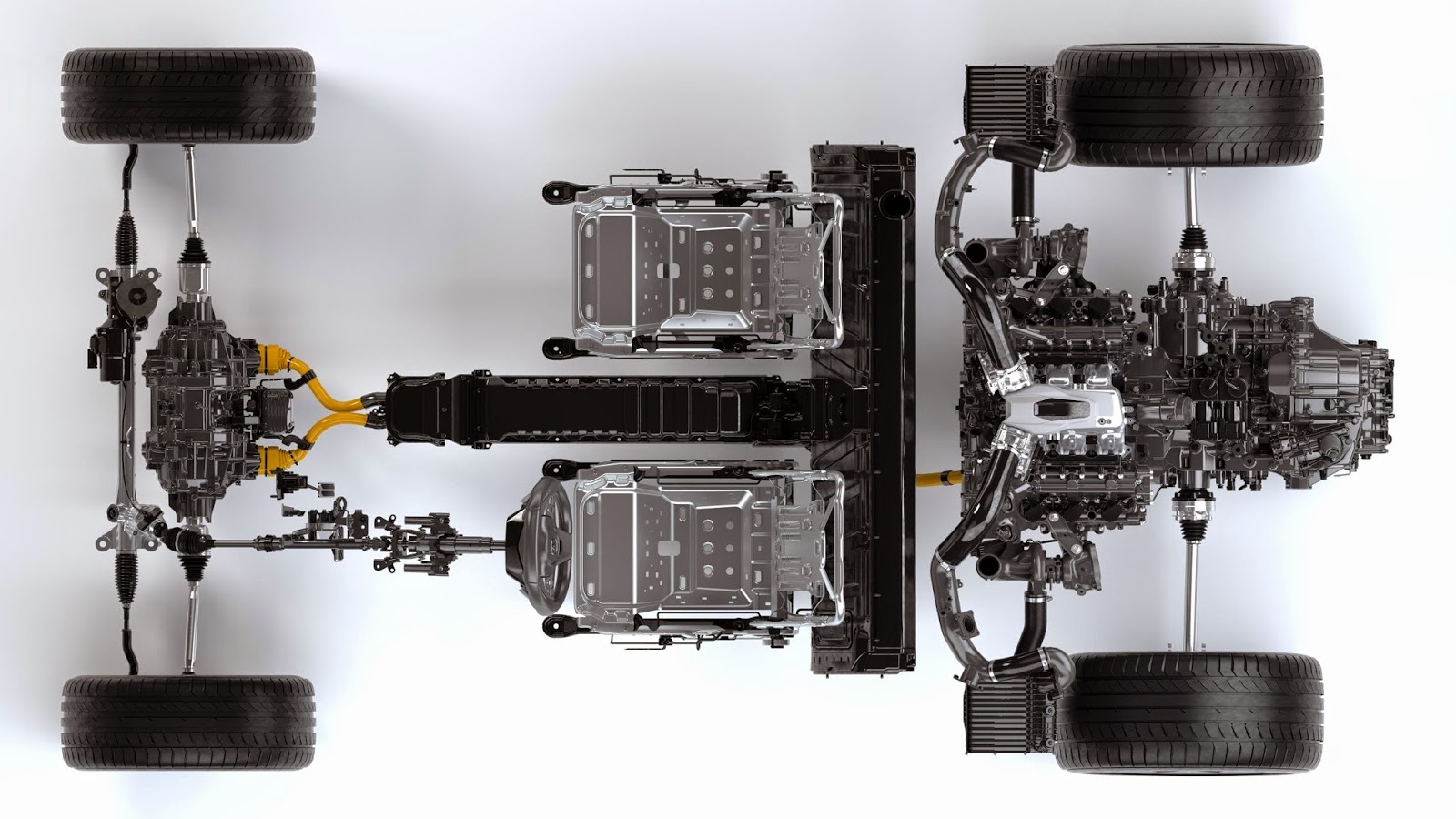 Piloting the 2015 Acura NSX, the driver can select to wheel the supercar with a selectable performance modes. Sport, Sport+ as well as Track modes available through a dual-operated Integrated Dynamic System configures the engine, transmission and handling responses to a particular mood. A Quiet mode is also offered on the NSX allowing the vehicle to be propelled slowly for a short distance on pure electric power. The driver of the Acura NSX will also be treated to near instantaneous acceleration from a standstill with a special launch function. 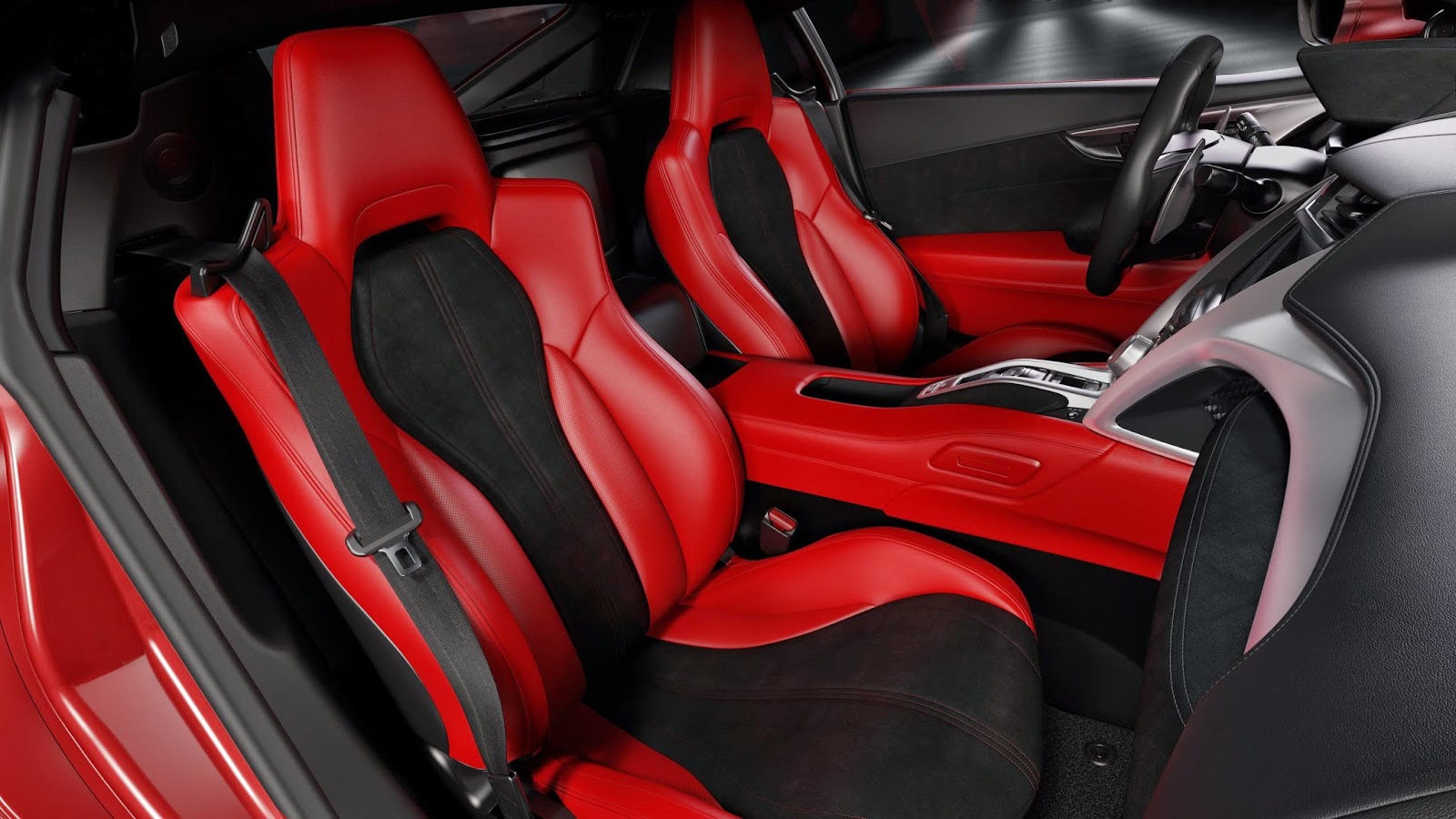 Described as a "Human Support Cockpit" by the Japanese premium brand, the Acura NSX's two-seat interior immerses the driver with a strong sense of vehicle control. Handcrafted leather dash panel, a center console mounted Power button and a TFT display system are all found inside the cabin finished with a tri-colour appearance.

Being produced in Maryville, Ohio within the Performance Manufacturing Center, Acura and about 100 associates will oversee the construction of the NSX from start to finish. Custom orders for the Acura NSX will be accepted sometime during the summer while deliveries will occur before this year is over.