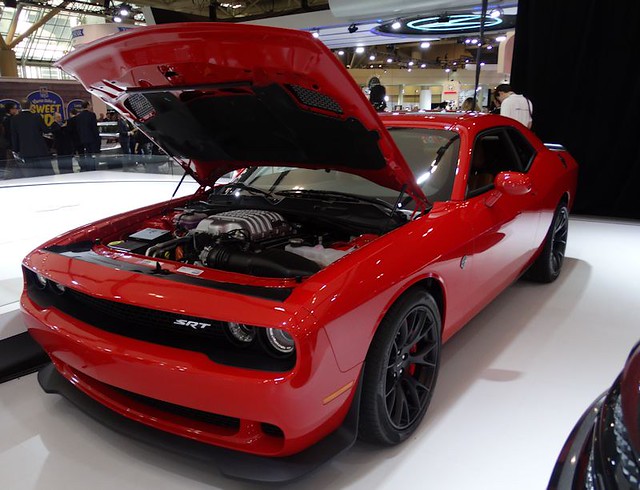 Last year, the Mopar world was awakened by Dodge's new super high performance SRT Hellcat line of vehicles elevating the cause of muscle cars to near ridiculous level. A supercharged HEMI V-8 powerplant pumping out 707 horsepower and over 200-mile per hour speed potential were the numbers expected from a race car, not the most powerful production vehicle built under the Dodge brand. First appearing in the form of the two-door Challenger, the SRT Hellcat treatment was performed to the Dodge Charger sedan later last year. Now that the 2015 Dodge Challenger SRT Hellcat and 2015 Challenger SRT Hellcat has reached dealerships, the vehicle has moved quickly into the hands of buyers. Late February, FCA US (Dodge's parent company) learned of some of their dealers have been engaging in poor conduct in selling SRT Hellcat models that would not be available for months or perhaps not at all.

It was reported a number of dealerships took large orders for the 2015 model year muscle car without telling buyers their cars may not be available for a considerable amount of time. It was also a concern for FCA US that some orders will be unfulfilled leaving some customers without the 2015 Challenger Hellcat SRT and 2015 Charger SRT Hellcat. In fact, FCA US has allocated just one SRT Hellcat per month for authorized dealers (could be either a Dodge Challenger SRT Hellcat or the Charger SRT Hellcat) and only when they meet they meet specific conditions. Canadian dealerships are likely operating with a similar supply arrangement as the United States. FCA US is advising customers interested in the SRT Hellcat vehicles to ask dealerships questions in several matters including if their dealing with an authorized sales entity as well as on the car's deposit and if it can be returned.

Following the production announcement of the SRT Hellcat models, Dodge pleasantly surprised the marketplace with a relatively modest price tag. In addition to potentially misleading buyers with delivery dates, some dealers reportedly have also been pricing the Charger and Challenger SRT Hellcat models well above the MSRP (Manufacturer Suggested Retail Price). A frown upon practice, selling a car above MSRP is acceptable and customers need to treat it as a "buyer beware" scenario. Manufacturers regularly cautions dealers against marking up vehicles but it proves too enticing to ask more money for a high-demand product. Relating to FCA US, one case occurred almost two decades ago with the 1930s hot rod-styled Plymouth Prowler. In the 1990s, some dealerships sold vehicles at $10,000 US above the manufacturer's asking price and at least one later model left at sales lot almost double the mid $40,000 MSRP.

In Canada, the MSRP for the 2015 Dodge Challenger SRT Hellcat was $63,995 without including freight and taxes while the Charger SRT Hellcat's suggested price was $64,495. Needless to say, the Hellcat versions of the Dodge Charger and Challenger are hot commodities. From research I conducted online, the prices for the cars vary. For Canadian dealerships offering the Charger and Challenger SRT Hellcat models, several are close to being on-par with the MSRP (taking into consideration the all-in-pricing offered in Ontario. However, I also noticed others charging thousands above the Canadian MSRP.

Where some of the most striking markup is taking back is online through second-hand sources. Through a search in the Edmonton area, Kijiji revealed two 2015 Dodge Challenger SRT Hellcats being sold in the six-figure range with one advertised at over $115,000. Obviously, the rarity of the SRT models has resulted in a select group automotive investments to see what is referred to in the business world as a "Quick Flip". Lucky enough to buy a vehicle near the MSRP price, a seller offers the popular high-performance vehicle in essentially mint condition to someone unwilling to wait and able to pay extra now for the vehicle they want. It is worth noting that one individual paid $825,000 US for the first retail 2015 Dodge Challenger SRT Hellcat at the Barrett-Jackson Classic Car Auction in Las Vegas last September.