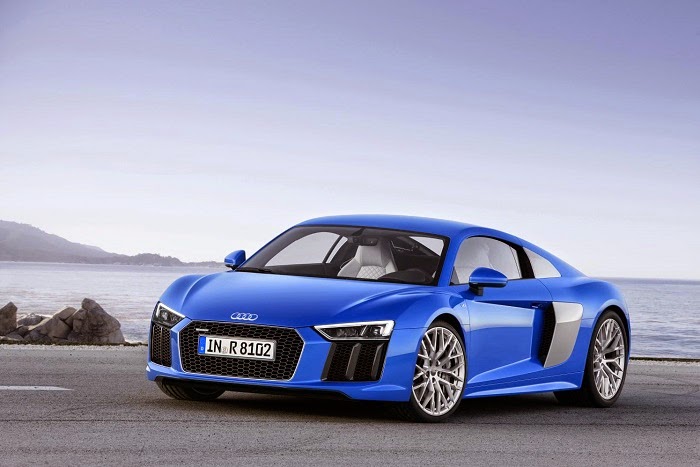 It is almost the 15th year anniversary for when Audi's first name in performance made a lasting impact on the world. March 2000, the Audi R8 prototype race car stormed to a momentous victory at the Mobil 1 Twelve Hours of Sebring. Following the maiden victory, the Audi R8 race car would become a dynasty defined by a dominate string of wins including multiple victories at the 24 Hours of Le Mans. Seven years after the break-through Sebring win, a street-going version of the R8 inspired by the legend and technology of the race car was first sold to the public. The Audi R8 supercar quickly gained a reputation placing it on-par with the best exotic high-performance cars in the world. Standard quattro all-wheel drive paired with reliable power from the original 4.2-liter V-8 and later a 5.2-liter V-10 engine was more than enough to become a halo car for the German luxury brand. After eight years on the market, the R8 road car will receive its first complete remodel.

Set for its first public introduction at the 2015 Geneva Motor Show, the second-generation 2016 Audi R8 returns with immediate ambition to win over the supercar crowd. The new R8's exterior design does not deviate greatly from original two-seat, mid-engine vehicle. Corporate design DNA displayed on other recently released Audi designs (particularly the TT sports car) is evident. A hexagonal Singleframe grille is one bold detail while side air intakes feature vertical slots. Restyled headlights come standard with all-LED lighting while European models will be available with Audi laser headlights.

One notable design detail at the side is the splitting of the so-called side blades. No longer a single piece, the contrasting coloured body panels remain in over the new Audi R8's side pods and between the side window glass and rear roof pillars. At the rear, a more pronounced diffuser and an edgier treatment to the taillights featuring dynamic turn signals. A trapezoidal shape defines the new dual exhaust system integrated into the bodywork in a similar manner as the first-generation R8. 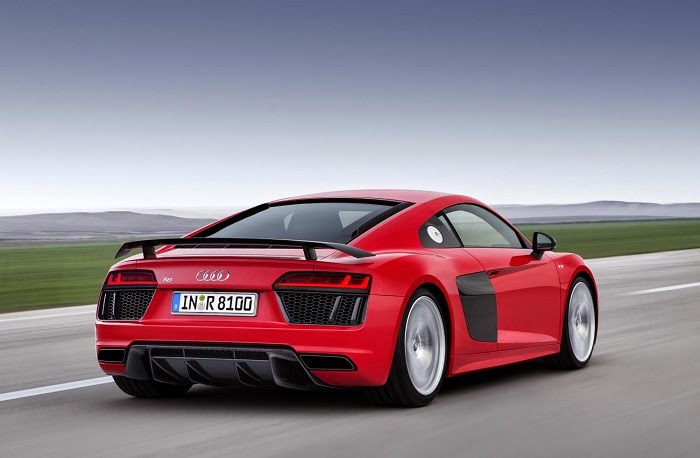 Structurally, the 2016 Audi R8 is constructed on a new multimaterial Audi Space Frame consisting of aluminum and carbon fiber components. Weighing just 200 kilograms, the Audi Space Frame aids the supercar's achievement for gains in weight reduction and rigidity. The employment of exotic materials continue across the R8's new body shell that is 15 percent lighter than the first-generation model of the Audi performance car but boasts a torsional rigidity 40 percent greater. Thanks to the new vehicle construction, the 2016 Audi R8 supercar can be up to 50 kilograms lighter than the previous model.

Observing the European specifications for the new-generation Audi R8, ten-cylinder engine will play a larger role in performance. With a 5.2-liter FSI V-10 powerplant, the base 2016 R8 will produce 540 horsepower. An Audi R8 V-10 Plus model is also available in Europe with a 610 horsepower power level. A seven-speed S tronic transmission is combined with a all-new quattro all-wheel drive system insuring improved control and handling. Acceleration from 0 to 62 miles per hour driving the 2016 R8 V-10 Plus model is slated at 3.2 seconds while top speed potential is 205 miles per hour. Achieving amazing performance potential, the 2016 Audi R8 can also more intelligently manage fuel. Cylinder-on-demand technology capable of automatically shutting down half the cylinders under certain driving conditions is being employed for the first time on the R8 supercar. In addition to a start-stop system, fuel economy of the new Audi R8 is measured to be 10 percent greater than the previous model.

Retaining the intimate charm of its two-seat layout, the 2016 Audi R8's interior is refined to emphasize the vehicle's performance-minded construction. Controls have been repositioned on the new generation supercar providing the driver with a heightened sense of purpose. A new multi-function steering wheel includes a range of controls adding a performance mode button with rotary wheel for dry, wet and snow programs. Another button also allows the driver to control the sport exhaust system. 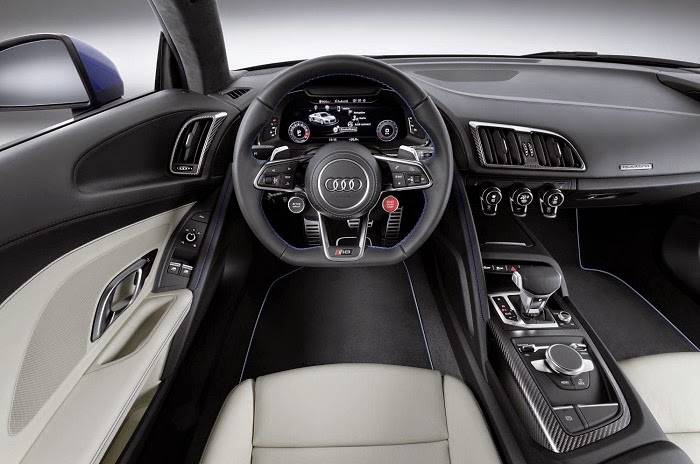 First shown on the new Audi TT, the 2016 R8's instrument panel is dominated by a 12.3-inch customizable display. The Audi virtual cockpit is a multi-function panel behind the steering wheel providing an easy-to-read presentation of relevant driving information. A performance mode connected to the Audi virtual cockpit prioritizes programs for driving dynamics such as acceleration and lateral forces. The information centre is operated through controls on a steering wheel.

For sport seats come standard on the 2016 R8 supercar while a lightweight set of bucket seating is also available. Alcantara/pearl Nappa leather and fine Nappa leather can be chosen to refine the cabin area. Audi is also presenting buyers with additional customization touches such as leather packages, diamond stitching pattern and clear-coated carbon fiber trim.

Along with the conventional V-10-engined Audi R8, the next-generation supercar is also slated to be offered with the prompt arrival of two special models. Along with the race-prepped Audi R8 LMS, the reengineered vehicle will also deliver the long-promised R8 e-tron. Optimized with a 0.28 drag coefficient, the Audi R8 e-tron will utilize an electric powerplant. No specifics has yet been offered on the complexion of the powertrain but power is rated at around 450 horsepower. Overall range for the Audi R8 e-tron is set at around 280 miles.  Using what is called the Combined Charging System, the electric vehicle can be both AC and DC charged.