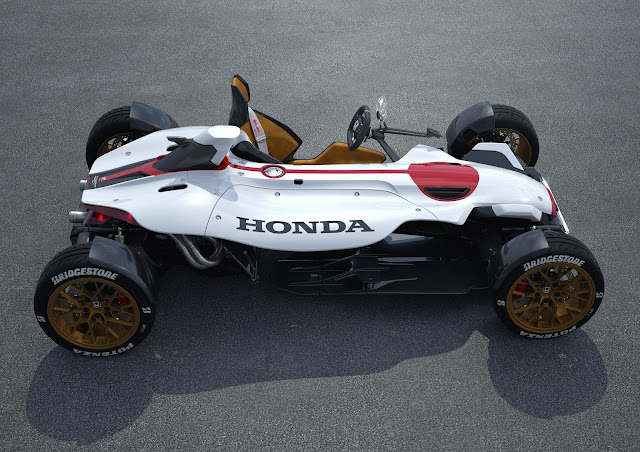 This year, Honda is celebrating an important milestone in both their motorsport history as well as the brand in general. On October 24th of 1965, a Honda constructed RA272 Formula 1 race car took victory at the Mexican Grand Prix. Leading the race from start to finish, Richie Ginther wheeled the first-ever Japanese built vehicle to win a Formula 1 event. For the 2015 Frankfurt Motor Show, Honda will unveil a modern homage to the performance that drove the 1965 Formula 1 machine that also represents the brand's 'The Power of Dream' philosophy.

The Honda Project 2&4 concept machine is a lightweight yet powerful mergence of vehicle types and ideas. A concept sculpted as a result of an in-house 'Global Design Project' competition among more than 80 designers, the final vehicle shape for Honda Project 2&4 Concept references the talent of a united 'Team Honda' entity. Project 2&4 marries automobile and motorcycle qualities for a raw sport vehicle that is actually street legal. 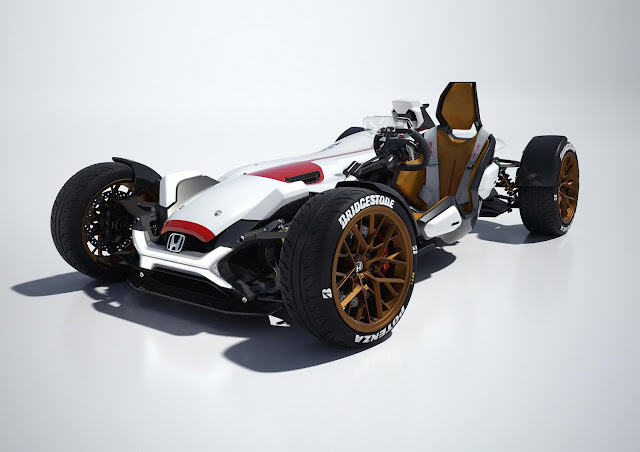 A shape inspired by Honda's RA272 race car and sharing a single-seat, mid-mounted engine, Project 2&4's physique resembles the barebones performance intent most racers seek. Bodywork is streamlined while functional components such as the exhaust and the suspension system is exposed. An open cockpit driving experience features what is called a 'floating seat design'. Through the seat positioning, the Project 2&4 places the driver intimately just above the road surface. Focused on a low center of gravity, the Honda concept car weighs just 405 kilograms (892.87 pounds). The Honda Project 2&4's exterior is wrapped in livery bidding tribute to the Japanese brand's participation in the1960s Formula 1.

Powering the concept is a 999 cc four-cylinder RC213V engine pulled from the racing bike used in MotoGP. Motorcycle-style, high-revving stamina is bestowed on Honda's Project 2&4 as the performance peak for roughly 212 horsepower is set at 13,000 rpm with the MotoGP power unit applied to the concept. Featuring a 14,000 rpm red line, the motorsport-derived engine has been tuned specifically for road use. A six-speed dual-clutch transmission is paired with the motorcycle powerplant.