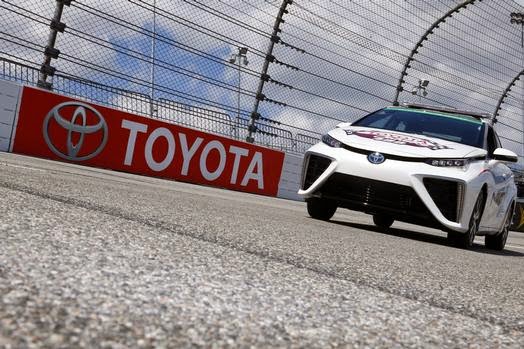 In NASCAR jargon, the term 'fuel cell' is applied to the protective cocoon created in the 1960s to contain fuel. In the scientific and engineering field, a fuel cell is seen as the future powerplant with a keen focus on automobiles. A system of panels that converts the reaction of separated hydrogen and oxygen into electrical energy, the technology has been heavily pursued by some automakers such as General Motors, Mercedes-Benz and Honda. Last year, Toyota introduced to the world their first fuel cell-powered production vehicle called the Mirai (meaning future in Japanese). When the Sprint Cup Series' Toyota Owners 400 at Richmond International Raceway took place on April 26th, the NASCAR circuit was better acquainted with the science and technology resulting in the future fuel cell.

Ahead of its sales introduction later this year (starting in California), the 2016 Toyota Mirai accepted pace car duties becoming the first hydrogen fuel cell vehicle to acquire that honour. Slightly longer than the Toyota Camry sedan, the 2016 Mirai is a four-passenger sedan's unique look and powerplant made an immediate statement in performing its duties at the Virginia three-quarter mile track. Undergoing an evaluation and approval process through NASCAR prior to the race, the specially-marked 2016 Toyota Mirai pace car only significant upgrade was a light bar. 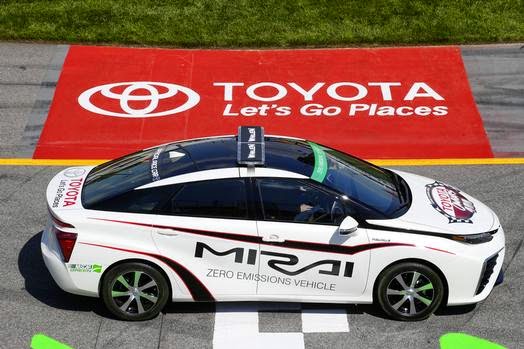 Turning hydrogen stored in two pressurized tanks into electrical energy, the 3.1 kW/L fuel cell of the Mirai generates roughly 151 horsepower. Taking five minutes to refuel with hydrogen fuel, the Toyota Mirai's fuel capacity is enough for a traveling distance of 300 miles. In pace car trim, the Mirai stood the test against lasting through the initial pace laps and 53 laps of caution over the course of the Toyota Owners 400. Able to move from 0 to 60 miles per hour in about 9 seconds, the mid-sized Mirai's performance is comparable to similar gasoline-powered sedans.