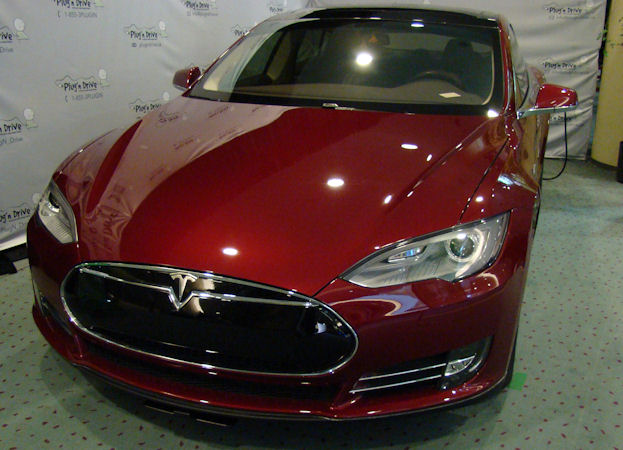 With months of cold, snowy weather, vast landmass and limited charging stations outside pockets of urban areas, electric vehicles currently face a tough road in Canada. A company driven technological visionary Elon Musk, Tesla Motors has not been deterred from expanding their dealership network north of the 49th parallel. The first Canadian Tesla store opened at Toronto's Yorkdale Shopping Centre in late 2012. Since the Toronto store opening, Tesla expanded west adding a sales outlet on Vancouver's Robson Street and added a several service outlets. This weekend, the city of Montreal receives increased attention from the electric car maker with the christening of a new store inside the large French-Canadian city.

Opening with a VIP celebration Friday night, Tesla's latest Montreal sales and service center came alive on Ferrier street. During the weekend, the mood of the dealership will be electric as the showroom welcomes the public to explore a range of technologies such their recently-announced Autopilot and Dual Motor setup. Part of the grand opening weekend includes hosted tech talks and the first opportunity for prospective owners to schedule appointments to drive the Model S at the location.

Technically Tesla's second branch in Quebec, this location is billed as offering the best manner for seeing the electric-powered brand. The first location positioned in the Montreal suburb of Laval has operated see late 2012 in a small outlet. The size and placement of the Laval sales office has led to its being classified as a temporary solution during the construction of the Montreal location. The new location is also only the third in Canada equipped to supply sales and service on the Tesla Model S (the others being in Laval as well as in Toronto on Lawrence Avenue East).

Presenting a unique sale concept for the Model S luxury sedan, Tesla has generated praise as well as resistance in the United States. Tesla Motors' direct from the auto manufacturer sales model has been heavily opposed by the states of Texas and recently Michigan. In Quebec, the electric car company has been greeted more warmly. Quebec's provincial government minister of energy and natural resources Mr. Jacques Daoust replied in a statement, "The arrival of a company like Tesla Motors has thus add to our leading expertise in diversified and complementary areas, such as the manufacture of batteries and charging". Minister Pierre Arcand who is responsible for Quebec's Plan Nord also welcomed Tesla's appearance in the province as a way forward for reducing greenhouse gas emissions.


Below is a 3-D video I captured during my visit of the Tesla store at Toronto's Yorkdale Shipping Centre: