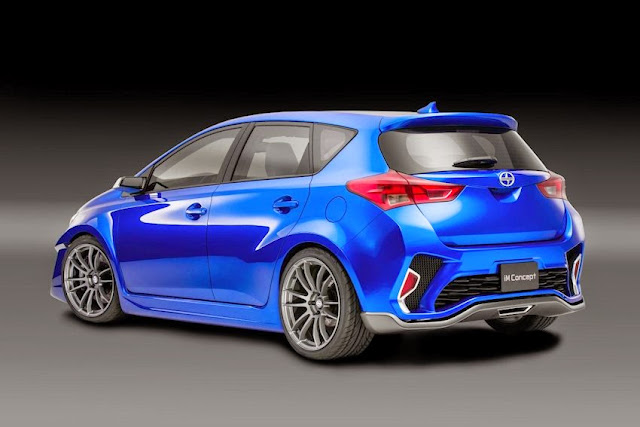 Since its introduction in 2002, Toyota's Scion brand has been fighting to gain traction as a hip and popular youth-oriented spectacle. Scion has been devoted in selling small, affordable vehicles while the North American Toyota brand converged itself on the mid-range of the auto sector. However, despite Scion's creative marketing and promises for personalization, the brand has not entirely succeeded in winning over customers. Recent additions of the FR-S and the iQ microcar has made Scion showrooms a more entertaining destination but the novelty of those vehicles appears to be exhausting. Scion sales in Canada following October is down compared to 2013. Division sales in the first 10 months of 2014 is down 18.8 percent compared to the same time last year. In order to reinvigorate the young blood of the Scion brand, a new hatchback concept car will debut at the 2014 Los Angeles Auto Show.

The Scion iM Concept car is a five-door hatchback, the stylish compact car appears to be the spiritual successor to the Toyota Matrix. Billed as a fusion of sporty style and versatility, the iM Concept is being advertised as a vehicle adapted to the evolving tastes of younger drivers. The five-door hatchback incorporates a series of design touches derived motorsports as well as compact customizers. A body coated with a paint colour called "Incrediblue" features front and rear fascia panels with lower air dam details. The Scion iM Concept's lowered stance made possible by a height adjustable suspension system allows the aerodynamic pieces to stand out further. All four performance tires on the iM Concept car are mounted to forged 19-inch alloy wheels.

Said to be inspired by European touring cars, this five-door hatchback borrows a lot more than inspiration from overseas. Subtracting the sport compact equipment, the Scion iM Concept car may appear very familiar to some global automobile fans. New to North America, the iM Concept car already exists in the world as a production vehicle. Marketed as the Toyota Auris, the hatchback is commonplace in Europe, Australia and Japan constructed on a platform similar to the Corolla. In global markets, the Auris is offered in a multitude of configurations including a wagon-like touring version and a hybrid. Overall shape as well as headlight and taillight housings look practically identical on both vehicles.

Somewhat crushing that Toyota hasn't delivered a completely unique concept car for the North American in Los Angeles through Scion, the styling exhibition is eye-catching as a dynamic tone to the hatchback. At least Scion can be credited with making the iM Concept something enticing to find in our driveways. Existing as a concept at the upcoming Los Angeles Auto Show, existing production history and marketing strategy has all but guaranteed this Scion could be found in dealerships within 12 to 18 months.