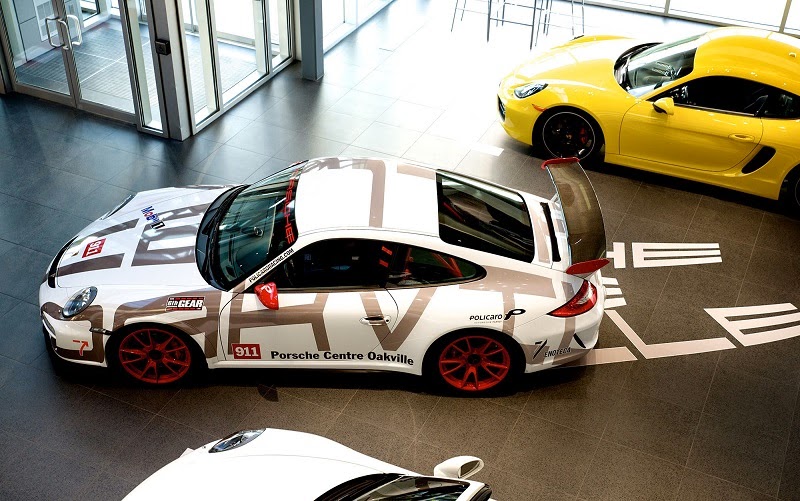 Porsche's enthusiasm for motorsports has been the cornerstone of the brand's prestige as a sports car maker. While the German performance vehicle builder has been regularly competing with production-based race machines through the 21st century, Porsche has not had a purpose-built race car entered in the top prototype category of Le Mans. In fact, the last time Porsche contended in the prototype class of the French sports car classic occurred before Audi entered the their first R8R vehicle in competition. After 16 years, the 16-time overall event winner returned to the daylong sports car endurance race with the Porsche 919 Hybrid. Although the two Porsche entries suffered problems during the 24-hour race, there was still a celebratory spirit at Porsche Centre Oakville. This enthusiasm his now been recognized by through a global competition for marketing.

Triumphing against respected dealerships across the global Porsche network, the Porsche Centre Oakville won a coveted marketing innovation honour through the execution of a big party centered around the 24 Hours of Le Mans. This past June 14th, the Oakville sports car dealership hosted more than 500 guests over a 24 hour period coinciding with the big race in Le Mans. Featuring fun for a whole family, the dealership supplied an array of activities. For children, a face painting and the Junior Grand Prix consisting of a 65-foot inflatable race track equipped with Porsche peddle cars proved to be a big hit. For adults, facility tours and a 2010-model year, Le Mans-inspired Porsche 997 GTS RS delighted. Aside from the sports car race, soccer fans were accommodated with a custom World Cup lounge with foosball table. The Porsche Centre Oakville party also featured refreshments provided through a BBQ, popcorn station and ice cream truck.

Commenting on winning Porsche's marketing innovation award, General Manager at Porsche Centre Oakville Francesco Policaro said, "With our 24 Hours of Le Mans event, we tried hard to give out customers an exciting experience and to celebrate and support Porsche's re-entry into the famous European sports car challenge. It was a great day here at Porsche Centre Oakville as witnessed by the abundance of current and future Porsche owners that participated in our award-winning experience." Policaro also thanked Oakville-based marketing company 7 Communications for their assistance making the marketing innovation award a truly great achievement for Canadians.

Despite Porsche's unsuccessful campaign to capture a trophy at the 2014 24 Hours of Le Mans with the 919 Hybrid, the company continues to win fans.