Have Kids Been Cheated Out of Their Moment with the Ford GT?

The words of The Simpsons character Helen Lovejoy “Won’t somebody please think of the children!” comes to mind in a recent browse on Ebay.

Ahead of the 2016 North American International Auto Show in Detroit, I recalled a press release from Ford announcing a promotion with model builder Revell. Having built so many models as a kid and continuing to construct sets to this day, it’s a good feeling to see the pass time is still in existence. At the Detroit show, a custom-built scaled Snap Kit of the 2017 Ford GT was offered to a specific audience of younger automotive enthusiasts. “Letting kids build their own Ford GT is a great way to introduce them to the Ford brand and create new enthusiasts,” is part of what Ford Licensing manager Mark Bentley said ahead of the Revell Make n’ Take model kit program at the show. Unless a significant sum of kids have chosen to gain PayPal accounts and sell their specialized model kits in on-line auctions, I believe what I’ve seen a situation where adults are profiting against the joy and enlightenment that some future car lover would feel.

As someone who remembers my youth as a kid who loved cars and now old enough to realize there is a serious concern that the diehard appreciation of automobiles is in danger of slipping with the generations following, I find we should do everything possible to make motoring a welcoming, vibrant field of exploration for young people. It distresses me to observe so many of this North American International Auto Show limited release models being posted for sale on Ebay. The Ford GT Snap Kits have attracted some very adult dollars. A review of completed listings on Ebay has shown there is at least a dozen that have sold for hefty sums. With one selling just under $40.00 Canadian, there are also examples of the Ford GT Snap Kits selling above $100. When that type of money is being spent by Ebay buyers, there is an unlikelihood these kits will be constructed in the manner intended. Fortunately for those who truly want to explore the Ford GT at a smaller scale, retail versions of the kit due in stores in April with a purchase price of $14.99 US. 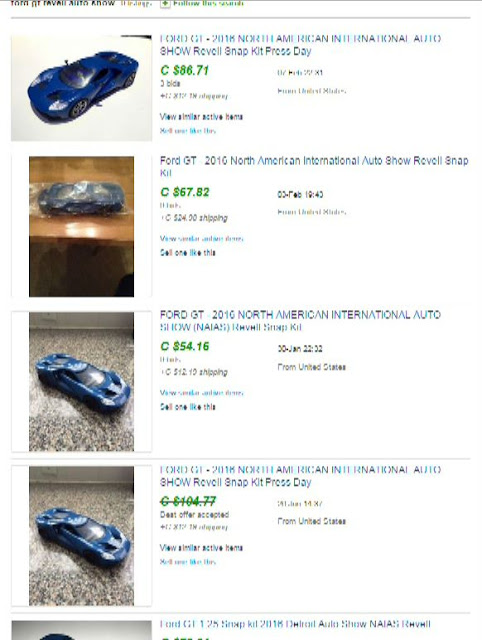 Since I am an active user of Ebay who frequently uses the on-line auction service as a resource to locate items I would otherwise not find, I recognize my sharing of discontent could be I personally ‘biting the hand that feeds you’. However, sometimes I am stunned and appalled by how Ebay could bring back out the worst demons found within the otherwise acceptable system of capitalism. Clearly, our modern society is built on the realization that something one possesses (a skill, persona as well as an item).

It would just be a shame to know some child was unable to partake in the total excitement of a modern supercar in their own way due to a greedy quest for a quick buck.