The 2020 NTT IndyCar Series promises to be a richly contended auto racing organization consisting of 17 rounds. A season set to start later this month, the top open wheel competition in North America has the opportunity to deliver some exciting, new possibilities for what viewers may see on track. Although many IndyCar fans will likely prepare to attend at least one race for 2020, television remains the most obtainable way to catch the racing action between drivers including defending series champion Josef Newgarden, Scott Dixon, Will Power as well as Canadians James Hinchcliffe and series newcomer Dalton Kellett. For 2020, the racing tour’s loyal fans in Canada are being granted the chance to follow the NTT IndyCar Series with greater access compared to a much-loathed 2019 TV package.

On February 28th, the IndyCar Series announced they have re-entered an agreement with Sportsnet to be the exclusive Canadian broadcaster for the 2020 season. The eighth consecutive year that Sportsnet will serve in the capacity to share the sport with audiences in Canada, the 2020 schedule for a second year comprises of full season coverage on their premium SN World channel as well as with the SN NOW+ streaming service. A refreshing improvement to the NTT IndyCar Series’ Canadian TV package is the addition of races on the more accessible sports channel within the Sportsnet network family. A total of 10 of the 17 events will air on Sportsnet 360 including the opening round at St. Petersburg, Florida as well as the Indianapolis 500 and the Honda Indy Toronto.

The IndyCar/Sportsnet 2020 Canadian TV schedule appears to go to great lengths to atone for the unfavourable broadcast package that existed last year. Intended to air almost exclusively through SN World and the SN NOW+ service, the 2019 broadcast agreement for the open wheel racing series alienated a large share of the Canadian fan base. With each premium sports service requiring audiences to pay roughly $20 per month for the opportunity to watch the 2019 IndyCar Series tour, the scheme was viewed as financially predatory. Only the Indianapolis 500 and the Honda Indy Toronto were offered on Sportsnet’s more widely-viewed channels.

Making matters worse, last year’s broadcast package’s announcement came in less than a week before the start of the 2019 NTT IndyCar Series’ season opener. Sportsnet ultimately allowed Canadian fans to watch the St. Petersburg street race via a free live-stream when it was revealed the race would have been aired on a tape delay telecast in SN World. Allegations were made shortly after the announcement of the less than fan-friendly 2019 TV deal pointing at both Sportsnet executives being disinterested in auto racing coverage as well as the failings of IndyCar’s new in-house media branch that was setup in late 2018.

For 2020, Canadian race fans with a basic cable package will likely be able to watch numerous IndyCar broadcasts on the American NBC channels. Of the 17 races, eight will air on the conventional NBC networks that includes the 104th running of the Indianapolis 500. For Canadians receive Sportsnet 360, only three races will be inaccessible counting for the event airing on NBC.

SN NOW+ in Canada and NBC Sports Gold in the United States offer streaming of 2020 IndyCar Series events. Both streaming services can be ordered independently of a paid TV packages. Pricing for SN NOW+ is $27.99 per month or can be ordered on an annual basis for $249.96 (equating to $20.83 per month).

With the first race 2020 NTT IndyCar Series season set to receive the green flag on March 15th, the improved television deal with Sportsnet comes with the mixed blessing of Canada’s own James Hinchcliffe contributing to the NBC broadcast. Losing his full-time ride as his previous race team was absorbed into McLaren SP, Hinchcliffe is set to run just three events for 2020 with Andretti Autosport. The Oakville native will serve as an analyst for much of this season and will also contribute his personality to Indy Lights, IMSA and the NASCAR race at Indianapolis Motor Speedway during the fourth of July weekend. 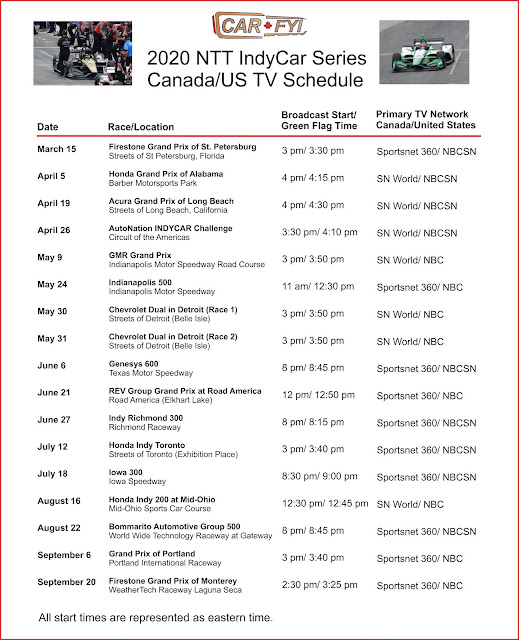