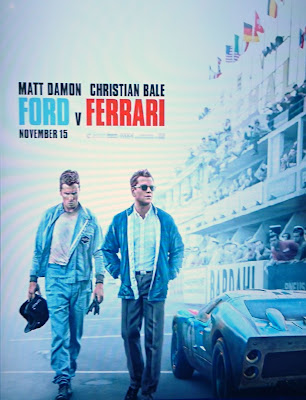 For the first time in more than seven years, I was drawn to a movie theatre this weekend for what may be an obvious reason when I inform you that my last cinema experience was attending the documentary Senna in Toronto. In 2019, my film-going motivation was based on the big screen adaptation of the great American auto racing story behind Ford’s reign at the 24 Hours of Le Mans in the latter part of the 1960s. Ford v Ferrari is a docudrama with the polish of a big Hollywood production that admittedly both excited and concerned me prior to the positive word of mouth after the Toronto International Film Festival debut since sport-related movies are a hit or miss affair. The production values of the Ron Howard movie Rush has inspired confidence that auto racing can be depicted honourably on the big screen. Much like the Ford GT40 race car that went on to climatic greatness on the race track in 1966 as well as on film screens today, the right balance of parts and components make Ford v Ferrari into a sensational performer.

Ford v Ferrari’s story is set mainly between 1963 and 1966 as the Ford Motor Company works to construct a sports car purpose-built to beat the world’s best performance name. A rivalry stoked by Ford’s failed attempt to purchase Ferrari, the movie establishes the means required to reach their desired results. Ford v Ferrari is directed by James Mangold who possesses a stellar filmography that includes the Johnny Cash biography Walk the Line and the 2017 hit X-Men based movie Logan. From the very capable directing, the movie receives fully-developed scenes with excellent acting.

In order to make their GT40 a winner, the automaker contracted with American sports icon Carroll Shelby that is played by the talented Matt Damon. The star from the Christopher Nolan Batman trilogy Christian Bale assumes to role of racer Ken Miles who served as the Ford GT40's primary test driver. Both Damon and Bale play their characters in a manner that brings the two great men of motorsports back to life. Bale’s Ken Miles performance stands out as an outwardly abrasive yet passionate racer. Shelby’s point of view is prominent as the team’s orchestrator but the film also gave a compelling focus on Miles and his family (Caitriona Balfe plays Ken Miles’ wife Mollie while Noah Jupe puts on a wonderful performance as son Peter). A most refreshing aspect of Ford v Ferrari’s story was with Mile’s family as supportive of his racing career. Too often in Hollywood pictures around sports we end up with family members or significant others who do nothing more than endlessly worry about the dangers. In Ford v Ferrari, the only conflict arose when Ken Miles’ wife simply wanted her husband to be honest with his passion for racing.

Although Ford v Ferrari provides radiant portrayals of some legends of the automobile, the movie doesn’t itself into being a biography of any individual. Throughout the movie’s long though well-utilized 2-hour, 32-minute runtime, we witness not only the thriving to create a Le Mans-winning race car through Shelby and Miles but the movie also takes us into the corporate culture within Ford. Historical figures Henry Ford II, Lee Iacocca and Leo Beebe appear in Ford v Ferrari as complicated individuals who support the Ford GT40 program exercising their own authority. Specifically, Henry Ford II (grandson of the automaker’s founder) is depicted as a tough-as-nails persona who could be both stubborn as well as occasionally receptive. From other historical accounts I have been privy to this is actually an accurate depiction. There’s one scene where Henry Ford II walked into one of his company’s auto plants and hollers to his employees how they have to think about how to save the automaker. I’m sure one or two workers would have a thought swirl in their heads that the company wouldn’t be in such a slump if the corporate head didn’t push for the Edsel brand. Ford v Ferrari also includes some amusing minor casting choices. Playing late American racing great Dan Gurney the driver’s youngest son Alex appearing in a minor clip. While the story is based on the aspiration for a car to cross the line ahead of another car, some strong acting performances provide an unexpected thrill ride of emotions.

Overall, the film does a great job characterizing the egos involved in big league racing during the 1960s. With technology and the motorsport spectacle at its peak, winning a major competition meant more than perhaps even today. Ford v Ferrari shows the personalities in conflict with each other as they achieve what is presumed as harmonious team effort at the time. While battling Enzo Ferrari’s team, the Ford GT40's second major battle occurred between Shelby’s team and Ford management. Made out to be somewhat of a villain to Carroll Shelby and Ken Miles in the movie, Leo Beebe (played by Josh Lucas) was among the pushier influences from the Ford corporate level that included the infamous photo-finish. Beebe’s meddling in the race team depicted in Ford v Ferrari is mostly confirmed by Beebe himself in interviews prior to his passing in 2001.

One of the easiest things to praise about Ford v Ferrari is the film’s visual presentation. We are fully integrated with 1960s sports car racing with charming realism. It’s simply a majestic sensation to see classic race vehicles on the big screen. In the climax of the movie is the Ford GT40 battling a Ferrari 330 P3 at Le Mans looks brilliant. I also applaud that the majority of the soundtrack for Ford v Ferrari is the engines of these legendary cars. Too often with 20th century period pictures, there is a compulsion to heavily pepper in music of the era in order to constantly remind us of the setting.

Leaving the theatre after seeing Ford v Ferrari, I was left with fulfillment as a fan of auto racing. Knowing the real-life history of the Ford GT40 program at Le Mans, it was my privilege to admire such a marvelous cinematic reenactment. It was a special indulgence to watch such a well-crafted, thoroughly entertaining motion picture that shared my love for the sport.