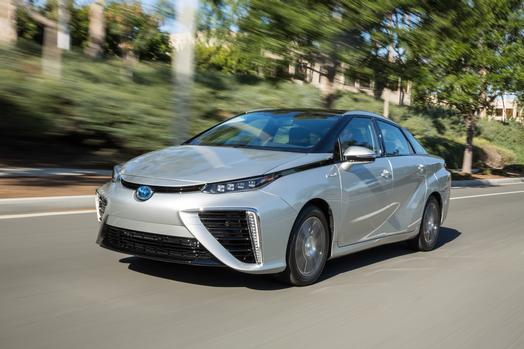 Great Scott! We've reached October 21st 2015. Where are the flying cars? Why can't I drink a Pepsi Perfect? Why haven't lawyers been abolished? The movie Back to the Future II certainly gave us a wacky prediction of what this day would look like. In late 2015, automobiles are still grounded but that doesn't mean technology has remained trapped in 1985 either.

Electrified automobiles existing in many forms is providing a futuristic reality. Even in the movie's version of 2015, Back to the Future II didn't tout alternative vehicle powertrains (Mr Fusion powered by the time circuits of the Doc Brown's modified DeLorean but gasoline was apparently still a mode of propulsion). Hybrid and fully-electric cars are driving the cause but visions of hydrogen being an automotive power source have also given birth to fuel cell research. Toyota has become the latest automaker demonstrating the possibilities of hydrogen fuel cell technology creating the Mirai as a real-world test bed. Officially launch the availability of the 2016 Toyota Mirai on October 21st 2015, the car company reunited two of film history's most popular time travellers.

Called "Fueled by the Future", Christopher Lloyd and Michael J. Fox appear together as themselves in the Toyota video. Lloyd and Fox are introduced to a real-life scientist named Misha who informs the two actors of at least one far-out idea from Back to the Future II's 2015 that has come true. Mr Fusion, the device that began powering the time circuits of the DeLorean after Plutonium scarcity caused problems with time travel, turned garbage and waste into an energy source. Misha explains how modern know-how can replicate the procedure of turning trash into hydrogen fuel.

Powered by hydrogen, the Toyota Mirai fuel cell vehicle is introduced to the Back to the Future stars in a cinematic manner. Toyota credits October 21st as the date the Mirai goes on-sale to the public. A vehicle associated with more than 5,600 patents, the Mirai can go as far as 300 miles without emitting any harmful emissions. At a price of $57,500 initially in the California area, the Toyota Mirai is also available through a 36-month lease for $499 per month. Up to 3,000 Toyota Mirais are planned to be offered in the United States.

The 2016 Toyota Mirai is not the only vehicle to appear prominently in the short film. A 2016 Tundra, styled after Marty McFly's dream Toyota 4x4 pickup in 1985, appears in "Fueled by the Future" as Misha's personal ride. Also look for the time-travelling DeLorean's cameo.

Toyota's Fuel by the Future video is provided below: